Our planet is home to a population of around 7.7 billion people (data April 2019) (1): of these, over 805 million people suffer from hunger every year and 36 million die, while 1.5 billion are overfed or obese. The food is produced in abundance, but of about 4 billion tons of food available annually, it is thrown away 1/3 still perfectly edible.

The environmental repercussions of the phenomenon are enormous: for example, the data say that if food waste were a country it would be the third world producer of climate-altering gases, after the United States and China or that the water used to produce the food that comes after thrown corresponds to New York's domestic needs for the next 120 years.

The issue of food waste has only recently been officially formalized, with the participation of various countries in international commitments. In September 2015, the General Assembly of the United Nations formally adopted the 17 new Sustainable Development Goals (SDGs) included in the Agenda 2030. Among the objectives we remember in particular the Goal No. 12 "Responsible consumption and production" which includes the halving by 2030 of food waste per capita in the distribution and consumption phases, as well as the reduction of food losses in stadiums upstream of the supply chain.

To counter the phenomenon, the European Union first of all decided to adopt, also for food waste, the principles that govern the so-called "Waste hierarchy" which generally establishes an "order of priority" in waste management. The waste hierarchy pyramid applied to food waste indicates waste prevention as a priority action, followed by donation to the needy and the production of animal feed, while food recycling, recovery and disposal are classified as "food waste". 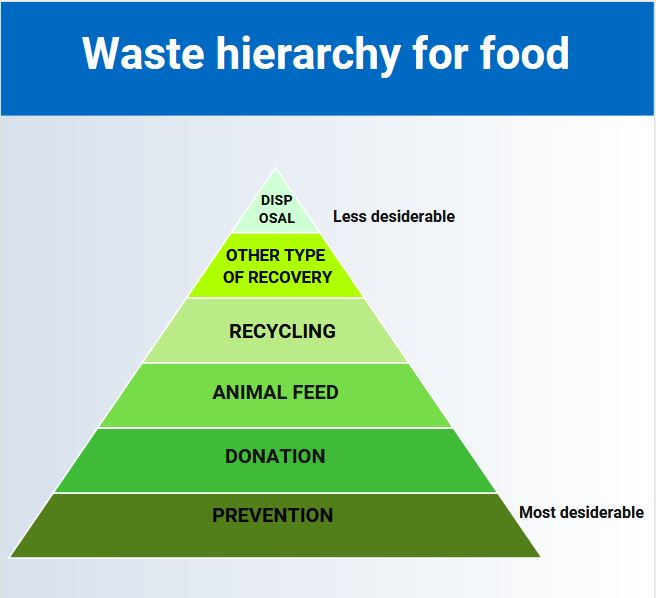 In the illustration is reported the suggested "order of priority" about the waste hierarchy for food, indicated from the most desiderable to the less:

In Italy, the law regulating the donation of food to people in need was issued in August 2016: it is the Law n. 166, the so-called Gadda Law, which among other things provides economic incentives for merchants who adhere to the initiatives of collection and redistribution of food surpluses managed by the Associations and Onlus.

Each of us can actively act to counter this phenomenon. In what way? Take a look at the tips on the "Reduction Rules" page, you will find many interesting suggestions to reduce food waste.

Do you want to make an informed food shopping? Discover the Reduce and reuse points.

If you want to learn more about food waste see the dedicated page on the institutional website of the Metropolitan City of Turin.